Welcome to Tyler:
"The Rose Capital of America”!

In the late 1800s, cotton and corn were main crops in the Tyler area, and fruit orchards were becoming increasingly popular as well. In 1879 the first recorded sale of rose bushes took place.

By 1900 there were more than one million fruit trees, mainly peach, in Smith County.

When peach blight, drought and winter freezes wiped out much of the fruit industry, many farmers turned to growing roses, which proved ideally suited to the climate and soil of the Tyler area.

By the 1920s the rose industry had developed into a major business, and by the 1940s more than half the U.S. supply of rose bushes was grown within ten miles of Tyler.

A leading pioneer in field-grown rose research was Dr. Eldon Lyle, who moved to Tyler in 1937. The Texas Rose Research Foundation was established in 1946 by area rose growers, and Dr. Lyle became its leader for many years to follow.

By 1945, there were 200 nurserymen, with 1,500 employees, growing roses commercially in East Texas, with Smith County producing 80% of the total crop.

In the late 1950s almost 300 rose growers produced over twenty million plants. In addition to rose growing, the rose-processing industry developed during this time. With the use of cold storage and plastic for packaging, businesses in Northeast Texas processed both local plants and roses imported from Arizona and California.

In the early 1970s more than fifteen million rosebushes continued to be shipped annually from Texas throughout the United States.

By the 1990s the rose industry had diminished in Texas. Out-of-state competition, along with unpredictable weather and some lost crops during the 1980s, contributed to the decrease in production. In the early 1990s the industry centered almost entirely in Smith County around the Tyler area.

Today, major players in the national rose growing and processing industry have significant facilities in the Tyler area, such as Chamblee's Rose Nursery, Tate Rose Nursery, Lone Star Rose Nursery, Certified Roses/Sexton Roses, and many others.

Seven Tyler-area companies process and distribute several million roses each year and about 75% of all roses in the country are handled in Tyler.

For more information, we recommend a visit to the Tyler Rose Garden web site operated by the City of Tyler, the Tyler Economic Development Commission, and the Chamber of Commerce.

The Tyler Municipal Rose Garden is the nation's largest rose garden, spanning 14 acres. The gardens include over 38,000 rose bushes and over 600 different varieties, as well as reflecting pools, walkways and fountains.

The gardens are a popular destination for both local residents and for visitors, and offer a diversity of photographic opportunities.

They are the location for numerous wedding photo shoots, school group photos, parties, reunions and professional photography as well.

It is one of 24 All American Rose Selection (AARS) test gardens in the country, and also includes a unique Idea Garden created and maintained by the Smith County Master Gardeners.

The Rose Garden is open from dawn until dark, seven days a week. Admission is free.

The 2023 Festival Queen and theme were announced on January 5, 2023 at the Festival's Winter Gala at the Willow Brook Country Club. Laura Elaine Bryan will be the 90th Rose Queen, and this year's theme will be "The Story of Film".

The rose parade assembles at Front Street and Glenwood Boulevard, and then follows a route west on Front Street, through the East Texas State Fairgrounds and ends inside Rose Stadium.

There is always free parade viewing along the route, and reserved seats can be purchased for the Christus Trinity Mother Frances Rose Stadium. The annual parade features more than 100 entries including custom floats for the Queen and her court.

Where to Buy Cut Roses in Tyler

We all love to buy cut roses in Tyler ... a favorite vendor is available most any day from spring to fall.

For years, she sold her roses from her van parked in the corner of the parking lot at Brookshire's on South Broadway Avenue and Rice Road.

Today, they sell out of their van parked in the French Quarter Shopping Center, at the corner of Loop 323 and Broadway, near Einstein Brothers Bagels.

They have many different roses to choose from, the roses are inexpensive, and they last for days! Look for the van!

The Elegance and Color of Roses

The YouTube video lasts only a couple minutes, and has some easy-listening music. So turn up your volume, and enjoy some beautiful roses! 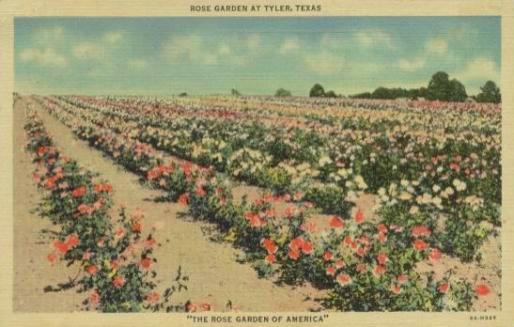