The flight museum staff have restored and have outside on static display a variety of historic military aircraft.

It also includes a gift shop and library, a multimedia theater room, and provides a variety of educational programs.

The HAMM hangar facility provides space for an aircraft restoration area and for flying aircraft.

The Museum also arranges for a variety of high-profile airshows and air exhibits to visit Tyler, such as those discussed below on this page.

We've visited the flight museum, and highly recommend it to all with an interest in aviation and history!

The Tyler aviation musuem has tens of thousands of items in its archives, and includes outside displays of restored, historic aircraft such as the following:

The photos of HAMM aircraft shown below were all taken by our staff, and posted on our other website, Airplanes Online.

Home of HAMM ... in the old Tyler Texas passenger terminal 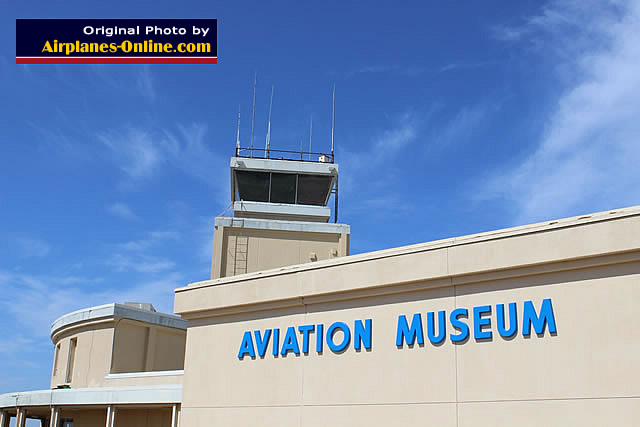 The 2nd annual Rose City Airfest was held on July 1-2, 2022, at the Tyler Pounds Airport. Highlights of the aircraft on display include the B-29 Superfortress "Doc" and B-25 "Devil Dog". Rides were available in some of the aircraft. Also performing were the USAF A-10 demonstration team as well as other air performance teams and Randy Ball's Mig-17.

Many of the planes in Tyler for Airfest were taking part in the Thunder Over Cedar Creek Airshow. This is a spectacular air show that entertains and amazes thousands of spectators with aerial acrobatics and an up close and personal experience with the power of fighter jets, both civilian and military. The entire air show performance takes place over Cedar Creek Reservoir. Spectators enjoy the air show from shore and on boats.

The purpose of the Collings Foundation is to organize and support "living history" events that enable Americans to learn more about their heritage through direct participation.

The Wings of Freedom Tour, sponsored by the Collings Foundation, returns to Tyler in 2018 to bring aviation history alive!

The "Wings of Freedom Tour" has two goals: 1) to honor the sacrifices made by our veterans that allow us to enjoy our freedom; and 2) to educate the visitors, especially younger Americans, about our national history and heritage. As a veteran, we highly support the work of the Foundation.

Visitors to Pounds Regional Airport will be able to tour several restored aircraft and take flights. An admission fee is charged, with tickets purchased at the HAMM Museum.

Aircraft that have appeared in Tyler include the following:

The Collings Foundation’s B-24J is the only restored flying B-24J in the world. A product of a multi-million dollar restoration, the B-24 stands testiment to the strength of the 1940's engineering that built it and helped it survive through many years of hardship.

One of only two Boeing B-29 Superfortress bombers that continues to fly is "FiFi", maintained and operated by the B-29/B-24 Wing of the Commemorative Air Force (CAF).

Today, "FiFi" resides at the Henry B. Tippie National Aviation Education Center, 5657 Mariner Drive in Dallas when she is not on tour.

Many of the planes taking part in the aerial demonstrations and mock attacks over the lake spend the previous night at Tyler's Pounds Regional Airport.

The show has become a large event, with over 40,000 spectators for the late afternoon / early evening events, including a Tora Tora Tora reenactment.

On November 8 - 9, 2011 the Salute to Veterans tour stopped at Tyler Pounds Regional Airport as part of the Aluminum Overcast tour, featuring a B-17G Flying Fortress.

The plane, one of only about 12 still in flying status today, has been restored and operated by the Experimental Aircraft Association, and is on a national tour of 70 stops.

Aluminum Overcast is recognized as one of the best-restored B-17s in existence. It offers a great experience for parents, grandparents and children of all ages to learn more about aviation history. It is a living tribute to the brave men who served, sacrificed, and, in many cases, gave up their lives defending freedom.

This B-17G, built by Vega (now Lockheed) under license from the Boeing Company, was one of 12,732 built. At the peak of construction during World War II, as many as 16 aircraft were completed each day.

The airplane was open for ground tours and booked special mission flights as part of the fundraising necessary to maintain and operate the airplane.

The Wings Over Tyler Air Show was held at Pounds Airport on July 3, 2011, with proceeds benefiting the Alzheimer's Alliance of Smith County and Texas Wounded Warriors.

This website is operated by a private entity with no connection to the City of Tyler, the HAMM Museum, or other governmental agency