Abandoned Railroad from Tyler, through Gresham and Flint, to Bullard and Lufkin

Those of us that have made the trip down Old Jacksonville Highway, heading south from Tyler to Bullard, have noticed the abandoned railroad right-of-way on the west side of the road.

The rail bed is still visible in 2023 in Gresham, Flint, and in downtown Bullard.

From near the Tyler Rose Stadium, the route ran south starting at Lufkin Junction, crossed Highway 155, and then near present-day Home Depot ran along the west side of what is now Old Jacksonville Highway. From near the current location of FRESH, the route ran behind Advantage Self Storage, passed over CR 164 at the entrance to The Crossing, and then continued behind Stewart Funeral Home. From there it ran along 164 (Mahar Road) for a distance south, and continued behind Bruno's Pizza, AAA Grass, Whataburger and other businesses in Gresham. From there it continued on to Flint, Bullard and Lufkin.

See maps below showing the rail line route as it traversed south to Gresham from the Lufkin Junction near the Tyler Rose Stadium.

The Kansas and Gulf Short Line Railroad Company was chartered in 1880, to connect Tyler with Sabine Pass in Jefferson County. In 1881, the company acquired the property and franchises of the Rusk Transportation Company and its 17 mile line between Rusk and Jacksonville.

Part of the roadbed of this company was utilized by the Kansas and Gulf Short Line during the construction of its line between Tyler and Rusk, which was completed on December 12, 1882.

The remainder of the line, about 44 miles between Rusk and Lufkin, was completed about July 1, 1885, giving the company ninety miles of mainline, narrow gauge tracks between Tyler and Lufkin.

On April 29, 1887, the company was sold to the St. Louis, Arkansas and Texas Railway Company.

Both companies entered receivership on May 13, 1889 and were subsequently sold at foreclosure to Louis Fitzgerald.

The Tyler Southeastern Railway Company was chartered on January 12, 1891, to acquire and operate the Kansas and Gulf Short Line Railroad Company, which it converted to standard gauge track by September, 1895.

In that year the company owned eight locomotives and 198 cars and reported passenger earnings of $38,000 and freight earnings of $86,000.

On July 1, 1899, operations of the Tyler Southeastern were assumed by the St. Louis Southwestern Railway Company of Texas, which merged the company on October 6, 1899.

The St. Louis Southwestern Railway (SSW), known by its nickname of "The Cotton Belt Route" or simply Cotton Belt, was organized on January 15, 1891, with its beginnings traced back to the Tyler Tap Railroad. From Tyler, the railroad expanded into Northeast Texas, thru Arkansas, and up to St. Louis.

This line, commonly known as the "Cotton Belt", continued to encourage and support the growth of East Texas, including helping farmers convert to a tomato crop after a blight destroyed the peach industry.

In 1926, tomatoes became the area's cash crop with over 8,000 acres being grown. Jacksonville is still known as the Tomato Capital of the World.

In 1932 the Southern Pacific Lines purchased controlling interest in the Cotton Belt.

The Route from Tyler to Lufkin in 1939, and the Abandonment

Shown below is a map of theCotton Belt route in East Texas, circa 1939. Note the stops from Tyler to the south ... Flint, Mount Selman, Jacksonville, Dialville, Rusk, Redlawn, Alto, Wells and Lufkin.

Southern Pacific later abandoned the rail line from Tyler south to Gresham, and beyond, in 1987.

Gresham is located six miles south of Tyler on Old Jacksonville Highway (2493) at the intersection with Farm road 2813. The community was established in 1877 as a shipping point on the railroad. A cotton gin was in operation by 1900.

Flint, at the junction of Old Jacksonville Highway (2493) and Farm roads 2868 and 346, lies just south of Gresham and four miles north of Bullard in Smith County.

The site, named for local landowner Robert P. Flynt, became a stop on the Kansas and Gulf Short Line Railroad in 1882. The post office began operations in 1887 as "Flint" since the local postmaster misspelled the town name on the post office application form.

In 1890 Flint had grown to have a general store, three cotton gins, a physician, and a population of twenty-five. By 1902, 100 families were engaged in truck farming, and shipped 85 railroad cars of tomatoes and large amounts of cabbage, cantaloupes, and peaches.

The town supported a blacksmith shop, a telephone exchange, a telegraph service, two mercantile companies, a cotton gin and gristmill. By 1914 local farmers shipped record amounts of nursery stock, fruit, and tomatoes from Flint, and the town had six general stores, a bank, and a newspaper, the Flint Weekly Reader. The Great Depression greatly injured the business of the area.

Bullard is located at the intersection of U.S. Highway 69 and roads 2493 (Old Jacksonville Highway), 2137, and 344, 12 miles south of Tyler in extreme southern Smith County. Parts of the town today are located in Cherokee County.

The Bullard railroad station was completed in August 1884 by the Kansas and Gulf Short Line Railroad.

The community became a shipping point for cotton, vegetables, and fruits. By 1890 the town had a sawmill, two general stores, a physician, a smithy and wagon shop, a telegraph office, cotton gin and gristmill.

By 1892 Bullard had added a grocer, a constable, a justice of the peace, a druggist, a physician, a feed store, schools, and a new general store.

A portable jail, seven feet in diameter and made of a barred round tank on wheels, held prisoners until the county sheriff could escort them to Tyler. In the post-World War II years Bullard again became a shipping point for fruit and vegetables.

Today, the railroad is abandoned, but Bullard is experiencing exponential growth as a "bedroom community" for Tyler, and a successful renewal of many of its downtown buildings.

The old abandoned route is now experiencing a new life, and purpose, as part of Tyler's Legacy Trails project.

Clearing of the overgrown right-of-way for the trails began in January of 2018. The project was dedicated in July of 2019.


Looking Back to the Cotton Belt in Tyler

The Cotton Belt Depot Museum in downtown Tyler continues the legacy and history of the railroad. A visit to the museum is highly recommended!

The depot was opened on June 2, 1905 in downtown just west of the Cotton Belt rail yard. The last passenger train in Tyler was in April, 1956, and afterwards the depot was used for railway offices and storage until it was abandoned in 1977.

On November 6, 1988 the Southern Pacific Railroad deeded the depot to the City of Tyler. The City used federal transportation grants, half-cent sales tax funds, and a grant from the Vaughn Foundation to restore the depot, reopening it in the summer of 2003. 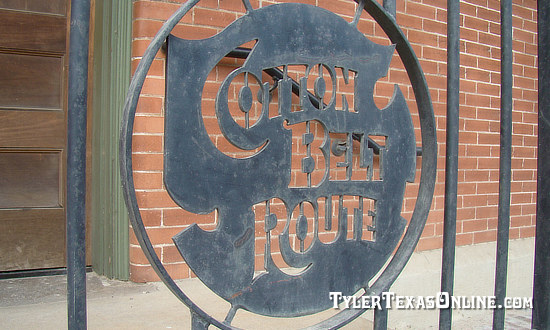 Shown below is a map of the stages of railroad construction over the decades by the Cotton Belt, including the route from Tyler to Lufkin.

Festivities began with the arrival of McKenzie and other cotton belt route officials by special car at 10:45 a.m. today.

After a reception given by the Tyler chamber of commerce, McKenzie and party placed a wreath on the grave of Maj. James P. Douglas, who founded the Tyler T-P Railroad, the forerunner of the Cotton Belt Route.

The anniversary celebration will be climaxed by an employee barbecue for over 3,000 persons tonight in Tyler Rose Stadium.